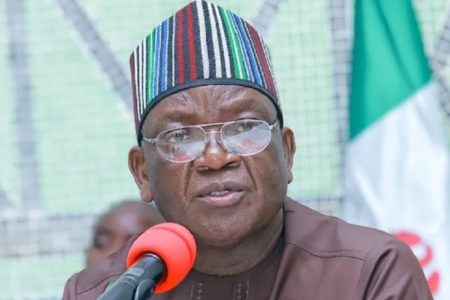 Wike, who lost the PDP presidential ticket to Atiku at the party’s primary election, is said to be feuding with Atiku over his (Atiku’s) refusal to pick him as his running mate.

THE WHISTLER had exclusively gathered that Wike had demanded the VP slot as his condition to support the PDP presidential candidate in the 2023 election.

But Atiku, who was alleged to have voluntarily promised to pick Governor Wike as his running mate, had eventually settled for Delta State Governor, Ifeanyi Okowa.

Governor Ortom, in a recent Arise TV interview, had accused Atiku of doing injustice to Wike and noted that he was praying and seeking God’s direction on whether or not to support the PDP candidate’s presidential ambition.

The Benue governor again appeared on the TV station on Wednesday, during which he said Atiku must ‘pacify’ Governor to earn his support.

“I am done with my prayers, I am done with my hibernation and the way to go is for our presidential candidate to reach out to Governor Wike whom I was supporting and I remain committed to his service because of his commitment to our party the PDP.

“And so, I remain committed to him (Wike). Once you pacify him, you have pacified me, and not just me, you have pacified millions of Nigerians, including some of my colleague governors, National Assembly members, State Assembly members, and so on. So, this we have done and our candidate has agreed (to) reach out to Governor Wike, discuss with him, and see how they can come to terms with what will happen,” said Ortom.

the Benue governor also reacted to reports that he reported President Muhammadu Buhari’s administration to the United States and the United Kingdom governments during his two-week vacation to both countries.

Some of the reports claimed that Ortom had asked the international communities to hold President Buhari and his government responsible for the killings in Nigeria.

But speaking to Arise TV, the governor said: “I did not go to report President Buhari to America (or) to the United Kingdom but I went there to talk about the reality of what is happening. Because it was amazing when I got to the United Kingdom, the questions that were being asked from parliaments and other government officials and civil societies were about Nigeria…that the problem is about climate change, deforestation, and other things.

“They were not talking about the real agenda of Islamizing…to use it as a shield by some Fulanis to Fulanize Nigeria. This agenda is not hidden and everybody is aware. TY Danjuma said it, President Obasanjo said it, and the Christian Association of Nigeria (CAN) said it, it is not hidden.

“But the narrative in the international community was that this is about climate change, so people are just making up things. But like I keep saying, it would be an illogical fallacy to say that Fulanis are evil. There are Fulanis that we’ve lived with and we’ve had no problems but these ones that are coming to create problems here…it is because some of our Fulani brothers and sisters have opened doors for Fulanis in Senegal, Niger, Ghana, and from all over Africa, to come into Nigeria, to support them to take Nigeria to become their country. That is why we are saying no, it is not right,” he said.

Ortom added, “Nigeria is a sovereign country, that I know. I am learned enough and I am experienced enough to know that Nigeria is a sovereign country, I cannot go and report them to the United Kingdom or America. But Nigeria is also a secular country and of course, because of the population and the strategic positioning and the wealth, especially natural resources that God has endowed Nigeria with, if we don’t do something.”