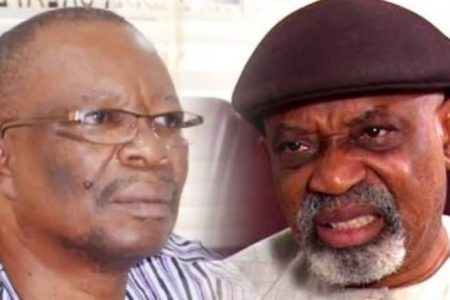 The National President of the Academic Staff Union of Universities (ASUU), Emmanuel Osodeke, said the Minister of Labour and Employment, Chris Ngige, is more interested in making newspaper headlines than resolving the issues that led to the union’s ongoing 5-month strike.

Osodeke stated this during an Arise TV interview monitored by THE WHISTLER on Thursday.

The ASUU President advised the Labour Minister to respect President Muhammadu Buhari’s directive asking him to step aside and allow the Minister of Education, Adamu Adamu, to take over the negotiations with the union.

Osodeke expressed optimism and satisfaction with the Minister of Education, Adamu Adamu, after he reportedly requested President Buhari to allow him take over the resolution efforts between the FG and the Union.

He described Adamu as someone who wants to solve the problem, rather than garner popularity.

The ASUU head explained that it was not the place of Ngige to divulge details of the terms of both parties’ ongoing negotiation to the media.

“The issue of collective bargaining is not a public issue and the Minister (Adamu) obeyed those rules, that’s why he doesn’t come to talk anyhow like the Labour Minister. Since the government handed over to him, has he addressed the press? No, that is because he wants to solve the problem, not to look for popularity, that is the Minister of Education.

“So we are working with him and when we finish, the document will come to the press because we don’t release our plan or negotiation content that has not been documented to the press. It’s against the rules of negotiation and that is what has delayed this issue,” he said.

Osodeke added, “What has been reported (Buhari’s directive), and he has confirmed, shows that if he (Ngige) has any dignity he should go and wait. If you have an issue and you’ve been making so much noise about it like he has and the President has said that you should let the Minister of Education handle it, you should know that the President has politely told you as a gentleman to go and wait, don’t come to the press. Go and wait. You suggested 1 week, the Minister said 2 weeks, is that your business? You should not interfere. It is interference that created this problem in the first place,” he said.

The ASUU President assured the general public that with Adamu at the helm of the affairs, the strike would be resolved as soon as possible.

“The country, the lecturers, the students and the government have a better chance of resolving this issue in a really short time now than when someone who was looking for press coverage was busy saying all sorts of things,” he concluded.