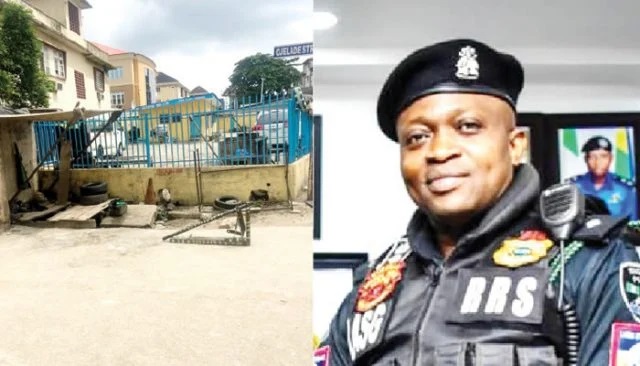 The Lagos Police Command has arrested its officers belonging to the Rapid Response Squad for brutalising and extorting money from a bus driver and two others.
The incident happened on Ojelade Street, in the Fadeyi area of the state, according to Punch.
A video clip of the incident, posted on Twitter by a social media user, revealed the cops assaulting the victims.
The video, posted by Connect Hub NG @HubNGR was titled, ‘Brutality: RRS police officers brutally assault man and 2 others at Fadeyi, Lagos State.’
The victims, who spoke to Punch on Thursday, stated that they did nothing to warrant the assault.
The bus driver, Olalekan Okanlawon, 34, told PUNCH Metro that N50,000 cash was extorted from him.
He said, “Around 6pm on Tuesday, I was trying to come out of Ojelade Street to the expressway. But immediately I came out of the street, I saw some officers in a Hummer bus. They were all armed and tough looking; I was scared, so I reversed back into the street.
“I did not know if they were actually police officers. They were in mufti; black tops and black jeans.  Then there was ‘RRS’ sign at the back of their vests, which I did not quickly see.
“Immediately I parked my vehicle, I noticed that the officers kept following me. When they got to where I parked, they started beating me up. They slapped, beat and threatened me with their guns.
“One of them drove my bus to the Tafawa Balewa Square. When we got to TBS, they parked in front of the race course and demanded N200,000 for the release of my bus. I pleaded with them that I did not have the money. I later informed my boss, who bailed me with N50,000 cash.”
His friend, Adeoye Adebukunola, said the cops pounced on him because he asked him to reverse the vehicle.
He said, “I told him to reverse so there won’t be any issues with them. The rest of the men came in a Hummer bus, about seven of them, and I saw them dragging my friend. They collected his bag and beat him up.
“One of the officers came to me and said I was the one that told the driver to reverse and I replied that I didn’t do anything wrong; he (the officer) just slapped me. They also threatened to shoot me twice and I had to mellow down for fear of being shot.”
The third victim, Ibukunoluwa Oladele, said the officers assaulted her because they thought she was filming the incident.
The 29-year-old trader said, “I was just passing by at the time of the incident, typing on my phone but they thought I was videoing them. One of the officers walked up to me and gave me a dirty slap and demanded my phone. I refused to give it to him and then he slapped me again without any explanation. They manhandled me in their bus and collected my phone. They unlocked it and didn’t see anything.
When they didn’t see anything, they dropped me off at Yaba. I had no transport fare because I had only come to buy something outside; I had to trek from Yaba back to Ojelade Street. They never apologised; the guy who slapped me said he would do something to me that I would never forget in my life.”
The state Police Public Relations Officer, Benjamin Hundeyin, confirmed the arrest of the officers in a tweet.
He wrote, “These officers have all been identified. The Commander, RRS, CSP Yinka Egbeyemi, will be interrogating them today (Wednesday). Further updates will be provided.”
The RRS Commander, Egbeyemi, refused to comment when contacted by PUNCH Metro.
Instead, he directed our correspondent to the state police spokesperson, Hundeyin.
Hundeyin, who spoke to Punch on Thursday, said, “I am still awaiting an update from the commander of the RRS but I have confirmed that the officers have been grounded and are not leaving the base until the disciplinary processes have been concluded.”
Many Nigerians, especially the youths, usually fall victims to police extortion and brutality, most of which are reported on social media.
The Lagos RRS, a specially trained anti-crime outfit under the supervision of the state government, had in the past been commended by the public for being different.
The unit, also called The Good Guys, was noted for rendering support to people in distress.
A security expert, Dickson Osagie, stated that no matter how good a police unit might be, there would always be bad eggs.
He said, “One of the duties of the police is the protection of lives and property. Even if a person takes one way as an offence, it is not a criminal offence; it is only an offence punishable by fine. But extorting money from citizens is criminal and any police officer caught in this act should be brought to book and punished. The men in question have been detained at the office of the Commissioner of Police and they will be tried for professional misconduct.”
https://twitter.com/HubNGR/status/1549324212858494976?ref_src=twsrc%5Etfw%7Ctwcamp%5Etweetembed%7Ctwterm%5E1549324212858494976%7Ctwgr%5E%7Ctwcon%5Es1_c10&ref_url=https%3A%2F%2Fd-22483198032439758666.ampproject.net%2F2207071723000%2Fframe.html